Barramundi or Asian Sea Bass, locally referred to as Modha

Oceanpick’s first choice species is Barramundi or Asian Sea Bass, locally referred to as Modha. The native species of Barramundi is widely distributed in the Indo-West Pacific region from the Persian Gulf, through Southeast Asia to Papua New Guinea and Northern Australia. It has a mild buttery flavour and is white and flaky when cooked, and is rich in Omega 3. The name Barramundi comes from the Australian Aboriginal language, while Asian Sea Bass is broadly used in the international market. Barramundi is a popular aquaculture species and is farmed in Australia, Malaysia, India, Indonesia, Philippines, Vietnam, Israel, Thailand, the United States and now in Sri Lanka by Oceanpick.

Barramundi is an iconic or rather a quintessential culinary delight in Australia. It is also popular in Thai and Goan cuisine. Its versatile and eco-friendly reputation has made it a sought-after fish type in the seafood market and its taste has made it a favourite among chefs and foodies. Farming of Barramundi started in Thailand in the 1970s and spread throughout Southeast Asia.

Oceanpick offers endless possibilities with its Barramundi, from whole round to portions and more. We ship to food service, importer, distributor, wholesale and retail clients worldwide Fresh chilled or quick frozen. 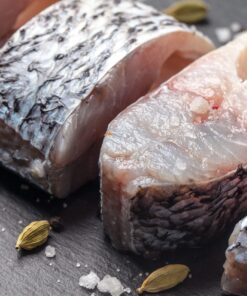 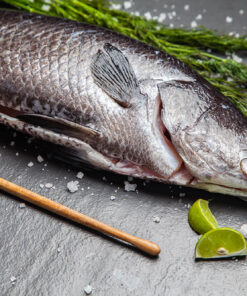 Barramundi can grow to a size of 1.5 to 2 pounds in less than a year. It is a highly suitable species for ocean fish farming. It contains only 137 calories with only 2.5g of ‘good fat’ per portion, which is half the calories of salmon, and tops the healthy food choices list. It is easy to cook and has a dense white meaty texture with no little bones to worry about, plus it doesn’t have a strong ‘fishy fish’ odour that will linger in your kitchens and hands. Barramundi is a super alternative to fish like salmon, cod and tilapia.